The Knights Venture Into Uncharted Territory with Apex Legends
PITTSBURGH, PA (April 19th, 2019) – Anyone in the gaming community that hasn’t heard of Apex Legends is either living under a rock or… well, that’s the only reason. The game has been a sensation since its initial release in February, when it was announced during the SuperBowl. No game has seen such rapid growth in both the casual and competitive spheres. Now, a little over two months after its launch, the Knights are announcing their Apex Legends teams. That’s right, teams.
The Knights have signed both American and European Apex Legends teams. The NA roster will be called the Gold Knights and the EU roster will be the Black Knights. 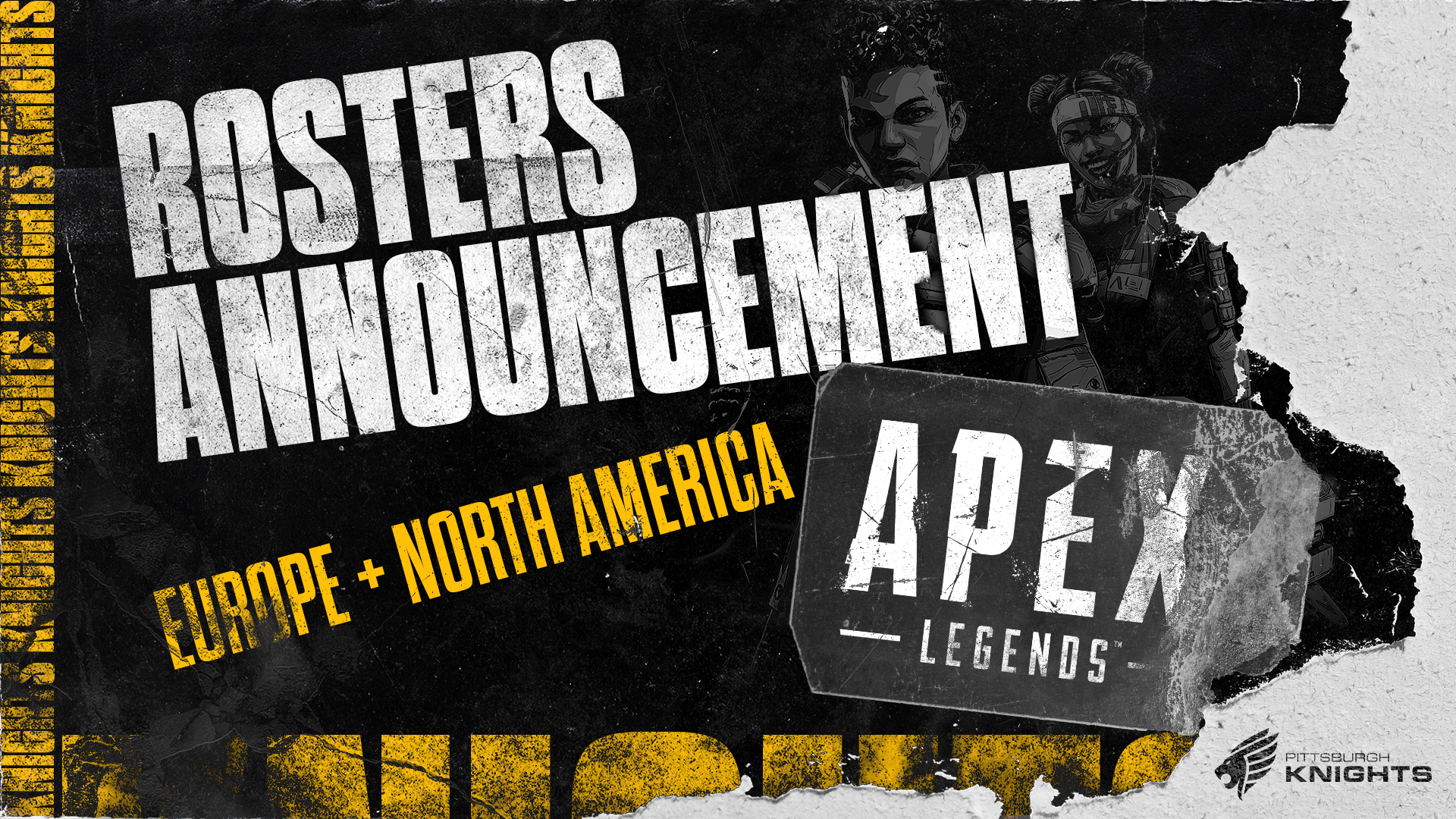 The Gold Knights are comprised of Haris “Hodsic” Hodzic, Samuel “zaphehe” Lohi, and Tyler “Sickks” Clark. Hodsic is a Pittsburgh native that has made a name for himself as an Apex expert. Having played Halo, Gears of War, Call of Duty, and DotA 2, among other games, Hodsic is excited about Apex Legends. “Apex grabbed me instantly with its really fast paced movement, rewarding gun play, and different characters with abilities,” he says. “The game has a lot of depth for outplaying your opponent, and that feeling never gets old.” Sickks is also a seasoned player, with CounterStrike 1.6, Realm Royale, Blade and Soul, and even a League of Legends coaching gig under his belt. He is happy to be turning his attention towards Apex, sharing, “[It] is probably the most enjoyable game I have played in the last 10 years.”
These players are just as excited about their team as they are the game. “I love my teammates and genuinely feel a brotherhood with them,” reveals Sickks. “There is a lot of talent on this team and even more hunger.” Zaphehe a former CounterStrike and Overwatch player, adds, “Sickks and Hodsic are easily the best teammates. We all have the same amount of dedication and fire in us to become as good as possible.”
Across the Atlantic, the Black Knights can claim Davy “Forcie” Buijtenhek, Kevin “LCKWD” Vellinga, and Samuel “Maverick” Cline to their ranks. The trio hails from the Netherlands and the UK and have played together for nearly a year. Maverick first got into esports with a different battle royale title – PUBG. He captained two professional rosters and landed in the top five for the PUBG Europe League Qualifiers. He’s since transitioned to Apex Legends and has not looked back. LCKWD, who previously played PUBG with Maverick, believes Maverick and Forcie, the self-described “world’s tallest Apex player” (he’s 6’9”), are “absolute beasts in Apex” and cannot wait to “frag out in some tournaments with them.”
“We’re, of course, really happy to get into the Apex Legends scene,” says Knights’ president, James O’Connor. “Ever since this game debuted it’s taken the gaming world by storm. Battle royales make for exciting and engaging gaming. We appreciate the time and attention the game developer put into Apex and we wanted to support this title.”
“As this game continues to grow, we really wanted to get the best of both worlds – both regions – so that’s why we wanted to do an NA and EU team,” says Jonathan Oh, director of operations for the Knights.
And both the Gold and Black Knights are eager to make the Knights proud. Maverick hopes to become the top team in Europe and “dominate the scene with the Knights’ name on my shoulders.” Hodsic aims to do the same state-side. As a Pittsburgher, playing for the Knights is especially meaningful. He explains, “I’m excited to be pursuing a dream while also having the ability to represent my city. I can’t wait to continue the tradition of making Pittsburgh the City of Champions!”
Apex Legends is a battle royale, hero-based shooter game developed by Respawn and published by EA. After its unannounced and unteased release on February 4th during the SuperBowl, it reached 2.5 million unique registered players in its first 24 hours online. Within its first week it had reached 25 million players, and 50 million by the end of its first month. The game was well received by critics, and is considered a worthy opponent to the reigning battle-royale smash hit Fortnite. For more information about Apex Legends, visit www.ea.com/games/apex-legends.
The Pittsburgh Knights are a global esports organization headquartered in Pittsburgh. Founded in 2017, we are the official esports team of the city and are focused on making an impact in the local community. Our team includes some of the top SUPER SMASH BROS. MELEE ™, PLAYERUNKNOWN’S BATTLEGROUND©, SMITE©, FORTNITE©, GWENTⓇ, PALADINS©, PUBGMOBILE©, and APEX LEGENDS© players in the world. Our goal is to create quality engagement with the local community, the online community, and the esports community at large. Please go to https://www.knights.gg for more information and the latest news on the Knights.