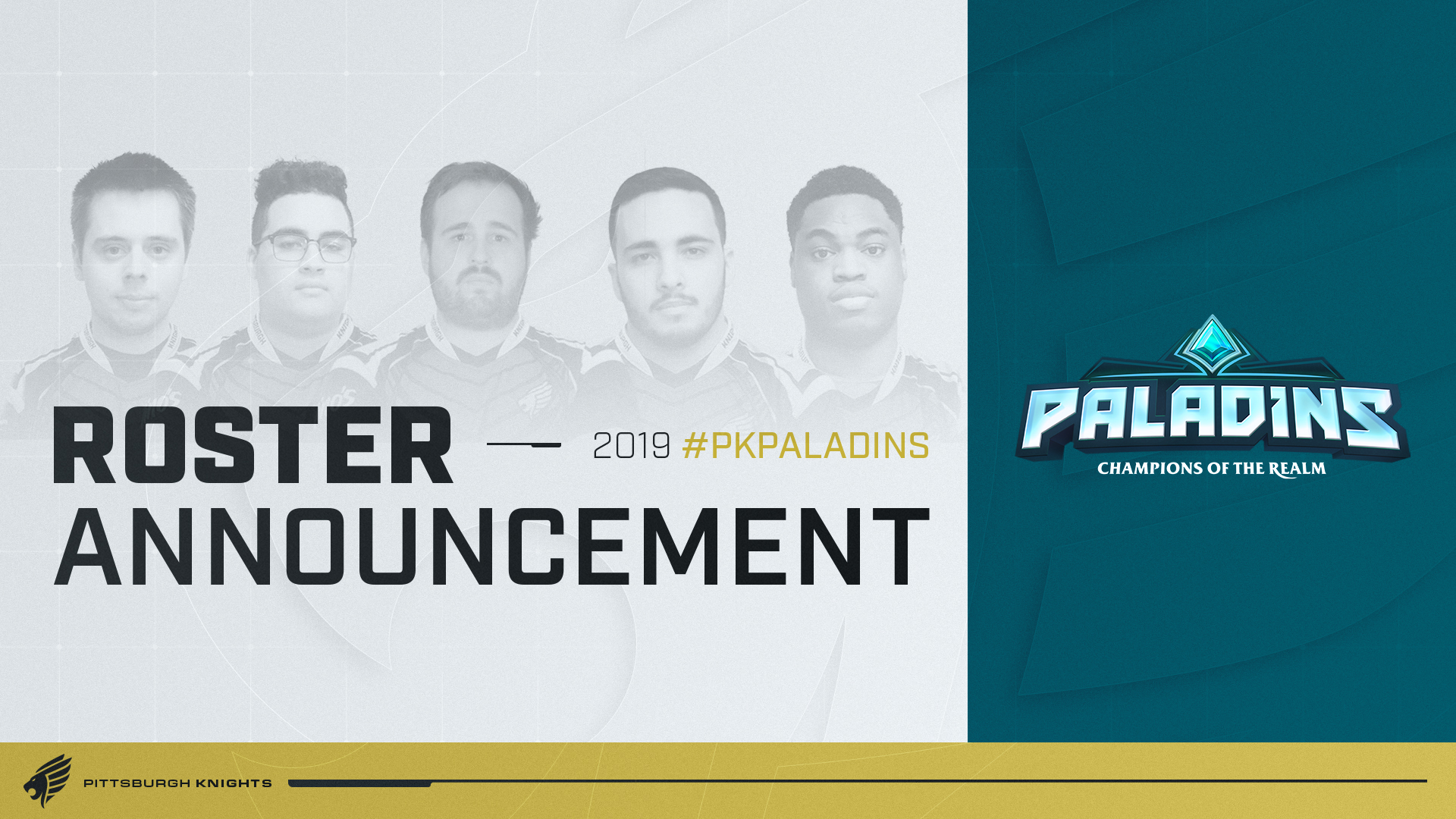 (PITTSBURGH, PA) January 30th, 2019 – The arena is ready, the stage is set. The last thing the Knights need for our entrance into the Paladins Pro League? A team. Doing things the only way we know how, here is the dramatic reveal of our Paladins roster for the 2019 Premier League season. Joining the Knights, we have Barida “Dethroner” Kpea, Jeremy “RKTA” Ballard, Nathaniel “Payen” Lopez, Christopher “Gbunny1” Trimarchi, Jake “Kusqt” Jenkins, and Cameron “VapoR” Elswick.
Dethroner is new to the first-person shooter (FPS) scene, having no previous experience in the genre. He began his esports career as a sub/manager for various teams, before securing himself a spot as a sub for the Team Envy Paladins. Through this position, he was able to jump over to SK Gaming, where he became a member of his first main roster team for Paladins. Dethroner is a popular streamer and content creator in the Paladins community. While most players approach FPS in an aggressive, charge-head-first manner, Dethroner describes himself as an “analytical passive player.” Rather than play the game on a purely skill-based level, Dethroner believes “it’s all in the mind,” like a game of chess.
Jeremy “RKTA” Ballard did not start off in FPS, having originally been rooted in MMOs. However, after finding the competitive Lawbreakers scene, RKTA quickly became obsessed with the fun and energizing nature of FPS. RKTA switched from Lawbreakers to Paladins, and became a part of a team that was later picked up by Splyce. As a part of the Knights, RKTA hopes he and his teammates have “an opportunity to make a large mark or legacy.”
Nathaniel “Payen” Lopez has a dedicated and unwavering love of esports. Having seen competitive play in Black Ops, Minecraft, Overwatch, and PUBG, Payen finally found his home with Paladins. Payen has won over 100 online tournaments, and even participated in a Paladins LAN as a player for SK Gaming. Payen is eager to play for the Knights, saying that he is “excited to represent a new org that has a lot of trust in their players.” He hopes that he and his teammates can help the Knights become “one of the best orgs of all time.”
Christopher “Gbunny1” Trimarchi has always loved MMOs and FPS games, sparked by Darkfall Online. Naturally, this led him to the competitive Overwatch scene, where he played for Nameless OW and they quickly became one of the top NA teams in the game. After his team disbanded, he moved into Paladins, joining Toxicity and meeting his current teammate RKTA. That same Toxicity team was then picked up by Splyce. Although he has yet to even put on the Knights jersey, he has big plans, “I am hoping for top 3 in the first season of PPL with the Knights.” Gbunny wants fans to see “that we are no joke of a team, and are capable of being the best in the world.” 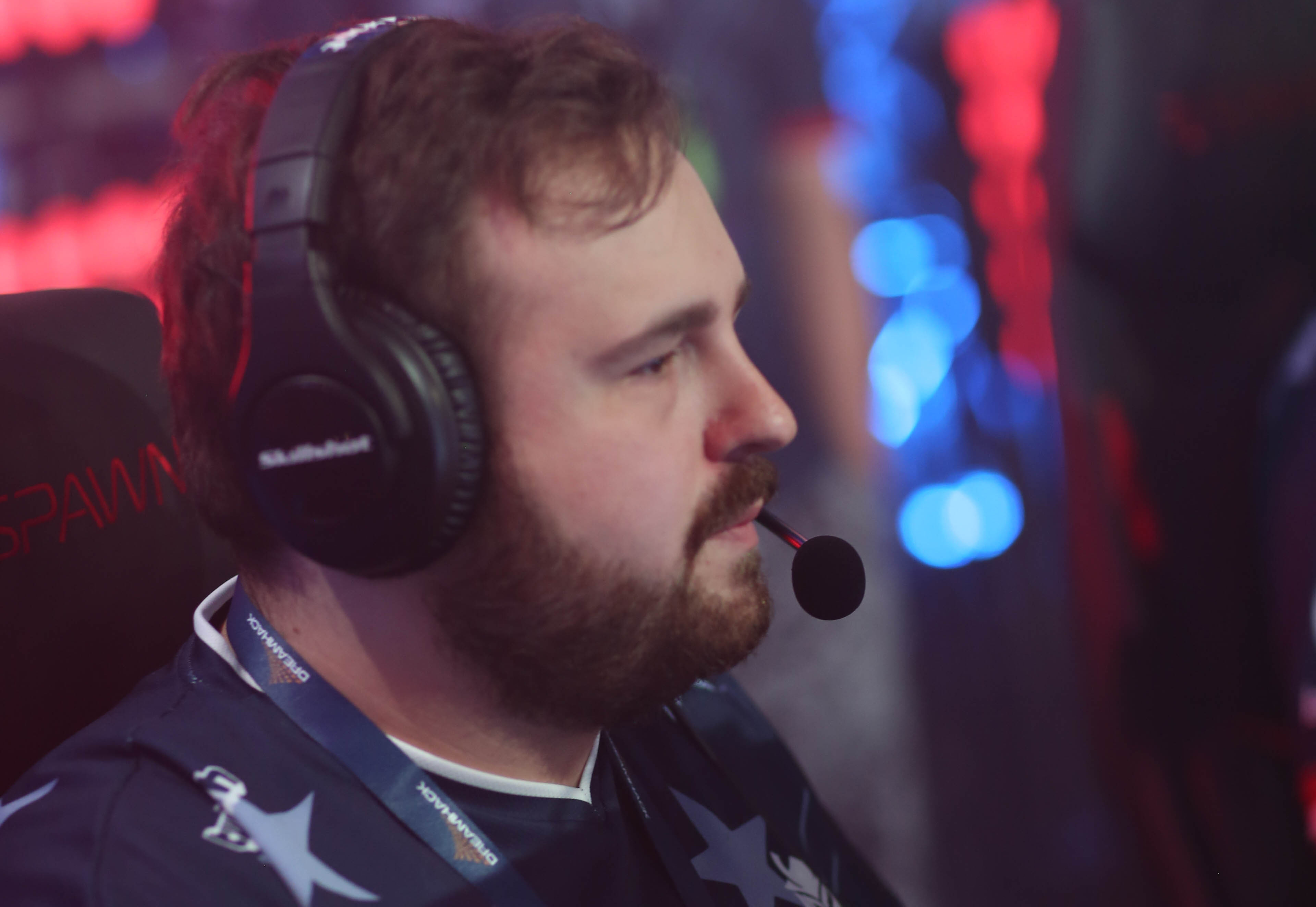 Jake “Kus" Jenkins is born and bred in Pittsburgh, so joining the Pittsburgh Knights feels like coming home. Kus is well-versed in the esports scene, having participated in Counter-Strike, Heroes of Newerth, Starcraft 2, League of Legends, and Dawngate. Despite his expansive repertoire, Paladins is his number one. As a part of Paladins’ competitive scene, Kus has won two international titles – Valencia 2017 and PPL Summer Finals 2018. Although he has little experience with his new teammates, Kus is hopeful, “My new teammates are young guns, and the first thing I wish to accomplish with them is developing them as players and personalities in the scene. I know these guys are going to be a mainstay in Paladins,” he admits, “and I can’t wait for them to get to prove that.”
Cameron “VapoR” Elswick has a long history of competing in and coaching esports. He has coached both Overwatch and PUBG and, although he enjoyed those games, they became stale and boring for him. Upon discovering Paladins, he was immediately hooked by “the unique characteristics of the game, along with its steadily growing esport scene.” Before signing with the Knights he played for both Gankstars and Team Sanguine Esports.
Paladins is a free-to-play first-person shooter (FPS), published by Hi-Rez Studios. Paladins is available on PC, PlayStation, Xbox, and, most recently, Nintendo Switch. Hi-Rez initially launched Paladins’ closed beta in late 2015, and then released its open beta a year later in September of 2016. Paladins is a first-person shooter where players can choose and fight as champions, each with their own unique attacks, functions, and skills. For more information, or to start playing Paladins for free, go to www.paladins.com
The Knight are the first esports team based in the Pittsburgh area. Founded in 2017, we are an organization focused on competing within the global arena of esports, while still making an impact in the local community. Our team includes some of the top Super Smash Bros. Melee ™, PLAYERUNKNOWN’S BATTLEGROUND©, SMITE©, Fortnite©, GWENTⓇ, PALADINS©, and Hearthstone© players in the world. Our goal is create quality engagement with the local community, the online community, and the esports community at large. Please go to https://www.knights.gg for more information and the latest news on the Knights.
###
Share on facebook
Share on twitter
Share on reddit
Share on linkedin
Share on email